Immersed Conference Delivers on Promise, Proceedings Being Made Available Online 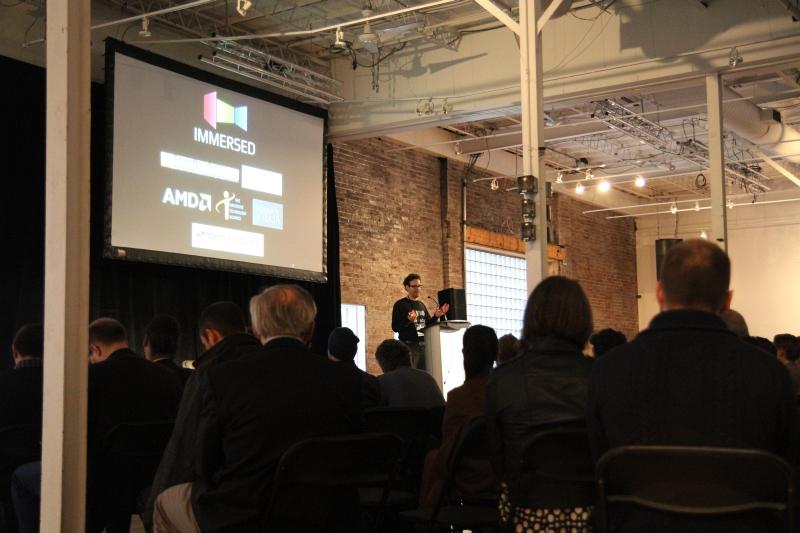 Toronto, Ontario, Canada (December 16, 2014) – Organized by The Immersive Technology Alliance, the Immersed conference was the first major East Coast industry building event for technologies such as virtual reality (VR), augmented reality (AR), and stereoscopic 3D. Featuring over 40 speakers and dozens of exhibitors, Immersed catalyzed new business success through networking, media exposure, and education. Proceedings from Immersed are being gradually made available online at http://www.getimmersed.com. Follow Immersed on Twitter at http://www.twitter.com/getimmersed  to be informed of new video releases!

“Immersed exceeded all my expectations.  The exhibition alone was worth the price of admission, with some of the best curated technologies and applications of the AR, VR, and 3D industries. Couple that with the stellar speaker line up, this was one event that was not to be missed, ” said Ana Serrano, Chief Digital Officer at Canadian Film Centre and Producer of the Body/Mind/Change David Cronenberg Rift Experience.

“Much as the Virtual Reality (VR) movie Lawnmower Man generated maximum inspiration despite being produced for very little money, the Immersive Technology Alliance (ITA) began as a non-profit formed strictly from vision and limited resources.

The Immersed conference demonstrated that not only is The ITA gaining its own powerful wings, but it is also fulfilling the VR/Artificial Reality community’s mandate with everyone’s interests and success at heart. The ITA’s growing influence on the industry is both remarkable and deserved. Anyone seriously interested in helping this industry grow for the long term only benefits by joining and participating,” said David Traub, Principal of Epiphany Film Fund and Immersed speaker who was also responsible for producing the on-display graphics work in the Lawnmower Man. Lawnmower Man is the 1993 science fiction movie that introduced VR to the global audience.

“Immersed was tremendously successful for us. We made some very important connections for our business and have been selected by Ontario ministry of Economy & Trade to go to NAB Show as part of the Ontario trade mission. There will be measurable results from the meetings we had,” said Irene Vandertop, Producer, DEEP 360.

Dimension Technologies Inc. showcased their latest 3D monitor prototype at Immersed, and garnered media attention and praise. They also benefitted from a new business relationship they didn’t have access to before.

“After seeing the DTI glasses-free 2D/3D displays at Immersed, Nvidia gave us the 3D Vision green light. Nvidia is one of the leading 3D software makers for gamers, so this is a big deal for us,” said Thomas Curtin, VP of Business Development for Dimension Technologies Inc.

“At Immersed, the top content producers, hardware innovators, and technology providers converged to shape the trajectory of the Virtual and Augmented Reality industry,” said Manuel Gutierrez-Novelo, CEO for ImmersiON-VRelia. “The opportunity to bring thought leaders from all areas of the industry together to share and learn from one another cannot be overstated.”

“Everyone felt a certain pride in having an event like this in Toronto. The attendees, speakers, and exhibitors regularly commented that Immersed was unique compared to other events they are used to attending, and we are certain it’s going to be even bigger and more influential next year,” said Neil Schneider, Executive Director of The Immersive Technology Alliance.

The next annual Immersed conference in North America is tentatively scheduled for October 4-6, 2015 in Toronto, Canada.

About the Immersive Technology Alliance (The ITA)

A non-profit corporation and non-proprietary in nature, the ITA is the official voice and industry body for technologies like augmented and virtual reality, 3D, gesture technology, and more. http://www.ita3D.com.